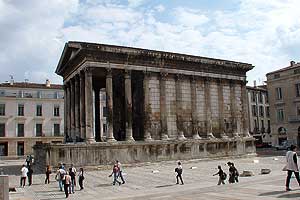 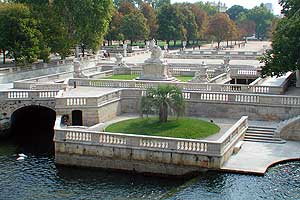 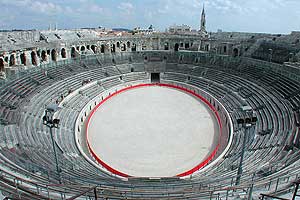 Nîmes is the prefecture of the Gard, it has about 150,000 inhabitants. Thanks to its status as a "Roman colony" granted by Augustus in the 1st century BC, a Roman city Nimes was rich and prosperous. To ensure the supply of water to a city with a growing population, Nîmes aqueduct built along 50 kilometers, with the prestigious work of art the famous "Pont du Gard." Many Roman buildings are still standing and recall the ancient splendor: the Arena of Nîmes, beautifully preserved, still occur in which performances including popular bullfights. La Maison Carree, a Roman temple in exceptional state of preservation, the Tour Magne, a remnant of the walls that protected the city, the Temple of Diana in the Jardins de la Fontaine. Nimes, however kept the imprint of his past including the medieval cathedral of Notre-Dame and Saint-Castor, and beautiful mansions dating from the 17th to the 19th century. Le Carré d'Art, a space dedicated to contemporary art, is a remarkable modern building of the late 20th century. "Feria de Nîmes" is the largest Feria in France, it is held for three to Pentecost and attracts over a million people. There is also another feria in September, the Harvest Feria.

Find a Guest house and Holiday rental near Nîmes

A gipsy caravan and three guest rooms in a beautifully renovated house near the village of Saint-Maximin between Uzès and Pont-du-Gard. Swimming pool and large wooded park. • Nearby: Uzès, Pont du Gard, Gorges du Gardon, Nîmes