Bed and breakfast in Grasse

Visit Grasse on the french Riviera

Grasse is a small town in the Alpes Maritimes, near Cannes (20km) and Nice (40km), located in the hinterland of the Riviera, about twenty kilometers from the beaches of the Mediterranean see. Grasse is celebrated as the world's perfume capital.

Five charming guest rooms in an old oil mill dating from the 18th century, completely renovated, a haven of calm and relaxation nestled in a green and narrow valley, in Pégomas, near the Bay of Cannes. Swimming pool. • Nearby: Grasse, Cannes, Côte d'Azur, Antibes 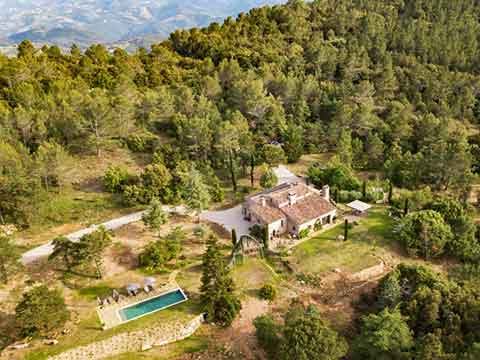 Four superb guest rooms in a renovated and eco-responsible Provençal farmhouse in the middle of nature in a wooded property of 10 hectares near Grasse, on the heights of the Cannes hinterland. Swimming pool, park, panorama, electric bikes. • Nearby: Grasse, Cannes, Côte d'Azur, Antibes

In the country of Fayence, three charming guest rooms in a superb listed 19th century building, in the heart of a 3500 m2 park, in Tourrettes, a picturesque and typically Provencal village, a stone's throw from the Lake of Saint Cassien. Swimming pool and large garden with trees. • Nearby: Saint Raphael, Estérel, Grasse, Cannes